You are here: Home / Uncategorized / Tackling long term back pain

Marathon training is in full swing with some of my clients and it is great to see them hitting the roads with all this rain that we have had!

This month I wanted to share a case that I have had in the clinic recently about a lovely client that had been suffering with a long term pain into her lower back. She has been suffering for 10 years approximately

She had seen various therapists in the past for the same problem but she wasn’t progressing as much as she hope she would have. A client of mine kindly passed on my details to her as she felt she wanted a different approach to tackle the problem.

This case highlighted to me to me how important taking a good history and timeline of a clients past injury history is, especially when going about tackling a persistent problem that had been troubling her for years. It’s still one of that main four principles of osteopathy that I adhere to and believe inherently in, especially when it comes to persistent long term problems.

THE BODY IS CONSIDERED AS A WHOLE. EACH PART AFFECTS EACH AND EVERY OTHER PART AND THE WHOLE IS GREATER THAN SIMPLY THE SUM OF THE PARTS.

I have 4 main questions going through my head when treating a client:

3: What is the true stressor of their symptoms (timeline of emotional and physical stressors)

4: What plan of action to we need to put together to get them back doing what is most important to them


The answer to the second question is very important as leads into question 4 to help me develop a treatment plan that is goal specific and not just symptom specific. I am interested in facilitating long term outcomes and not quick fix short term changes!

First and foremost she is an avid runner and was continuing to run through the pain to a certain extent as it was her downtime from the stresses of daily life. The problem was that running seemed to really aggravate her symptoms around the back of her lower.

Our goal was clear:

LETS GET HER BACK RUNNING PAIN FREE:  The ripple affect that this would have on her life would be huge.

1: Less frustration when running due to lack of symptoms
2: Less stress as able to do the thing that helps her get de-stress from the demands of 21st century living
3: Contemplate training for a race that she thought might not be possible
4: Better sleep as the body is producing less cortisol since the pain has decreased
5: Generally happier as now having a sustained period of being pain free (increased dopamine release)

To keep her assessment clear for you to follow we found the following:

I tend to have an 80-20 rule with any hands on work: 80% of our time needed to be spent on the cause of her symptoms: In this case 80% into her right medial hamstrings, right Medial calf muscles and MCL Ligament and 20% into her lower back to try and desensitise the tissue that were being overloaded:

Studies have shown that the tendons in our hamstrings and calf absorb around 50% of the load into the lower limb from ground reaction forces such as walking and running: If these tissues aren’t successful at doing that, then then that load has to be dissipated into the knee, hip and back. Her hip was struggling to compensate for this, so her lower back took the hit. We could of spent months continuously working on her back and it would of felt initially better but it wasn’t the problem and is soon as she started loading her body again there would of been a high chance that her symptoms would of returned.

Our treatment plan consisted the following:

1: Desensitise tisses in her lower back that were working to hard (to decrease stress on the discs, joints and nerves in her lower back)
2: Restore full range of motion to her R ankle and hip joints
3: Restore proper loading capabilities through the tissues in her knee and ankle
4: Gradually expose the foot and knee to progressive loads that are as functionally demanding as running is.

I am glad to report that we have had a great win with this client. I advised her on her exercises and she took accountability to do them between our sessions and she is now back running without having any symptoms into the lower back and has been consistently good for the last 3 months, she is now training for the Reading half marathon 🙂

So if you know of friends of family that has been suffering for a long time with a certain problem then please get them to contact me.

Roll on the good weather. 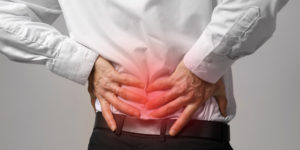 My back has gone again…..where has it gone? Its a common question I get asked when a client comes in to the clinic with excruciating back pain and its usually followed by something like “all i was doing was bending down to pick up the shower gel” One of the first replies I give is […]