Mario Ciccone Pain and Performance Osteopath is proud to include Low Level Laser Therapy (LLLT) as part of our treatment plans. We are trained in the use of LLLT and can help you understand exactly what is happening when you are treated using this most advanced system for healing.

LLLT (Low Level Laser Therapy) is the application of red and near infra-red light over injuries or lesions to improve wound and soft tissue healing, reduce inflammation and give relief for both acute and chronic pain.

LLLT is used to: increase the speed, quality and tensile strength of tissue repair; resolve inflammation and relieve pain (analgesia).

The red and near infrared light (600nm-1000nm) commonly used in LLLT can be produced by laser or high intensity LEDs. The intensity of LLLT lasers and LED’s is not high like a surgical laser. There is no heating effect.

The effects of LLLT are photochemical (like photosynthesis in plants). When the correct intensity and treatment times are used, red and near infrared light reduces oxidative stress and increases ATP. This improves cell metabolism and reduce inflammation. These effects can be enhanced with pulses however when analgesia is required there is a second mechanism which works best when a strong continuous beam is applied.

How does it work?

The primary effect occurs when light is absorbed in cytochrome c oxidase a protein within the mitochondria.

When cells get stressed (perhaps due to disease, injury or ageing) the mitochondria produces nitric oxide (NO). This competitively displaces oxygen from cytochrome c oxidase consequently reducing ATP (an essential intracellular cellular energy and extracellular signalling molecule) and causing an over production reactive oxygen species (ROS) and leading to oxidative stress. Oxidative stress is well known to lead to inflammation an cell death via the gene transcription factor NF-Kb.

Low Level Laser Therapy (LLLT) of the correct wavelength and density, dissociates NO allowing oxygen back in, so ATP is restored and oxidative stress reduced. Once normal mitochondrial function is restored by LLLT then cell metabolism is improves, and the patient gets better more quickly.

What are the benefits of LLLT? 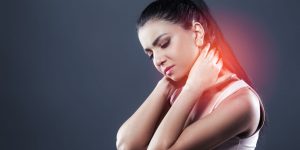 Max, our Associate Osteopath tells us about a recent patient he has treated with neck and shoulder pain: “I recently treated a forty year old female complaining of persistent neck and shoulder pain, which was travelling to the base of her head. When we discussed her situation, she told me that the pain tended to […]